This is a Century of Asia as much of the world’s economic growth is attributable to this part of the world. Within Asia, the ASEAN Economic Community (AEC) is set to integrate the region further in 2015 interesting and exciting time to study and work in Southeast Asia.

ASEAN, or the Association of Southeast Asian Nations, was founded in 1967 “to strengthen further the existing bonds of regional solidarity and cooperation.” The ten member states of ASEAN span more than 1.7 million square miles—over half the size of the continental United States—and include a population of over 626 million people with an economy valued at about US $2.4 trillion in 2012. ASEAN’s geostrategic importance stems from many factors, including the strategic location of member countries and the large shares of global trade that pass through regional waters. 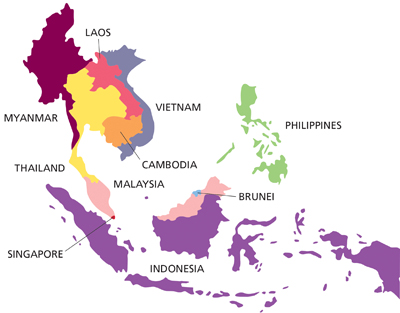 ASEAN economies are rapidly approaching a new milestone; the implementation of the ASEAN Economic Community (AEC) at the end of 2015. The AEC fundamental freedoms are becoming a point of increased focus for international business. The AEC sets the foundations of a single market and production base allowing for the free movement of goods, services, investment, capital and skilled labor. In addition, the ten member countries of the ASEAN are aiming at jointly realizing the development of a competition policy, the protection of intellectual property, the facilitation of e-commerce, and the introduction of a more comprehensive investment protection and dispute resolution system.

ASEAN Link is an intra-ASEAN connectivity platform to create greater ASEAN investment mobility amongst intermediaries. The first three exchanges to be connected on ASEAN Link are Bursa Malaysia, Singapore Exchange, and the Stock Exchange of Thailand.

The Greater Mekong Subregion (GMS) is a natural economic area bound together by the Mekong River, covering 2.6 million square kilometers and a combined population of around 326 million.

Increasingly, modernization and industrialization are emerging from a process of transition and transformation. The Mekong countries are gradually shifting from subsistence farming to more diversified economies, and to more open, market-based systems. In parallel with this are the growing commercial relations among the six Mekong countries, notably in terms of cross-border trade, investment, and labor mobility. Moreover, natural resources, particularly hydropower, are beginning to be developed and utilized on a subregional basis.

The rich human and natural resource endowments of the Mekong region have made it a new frontier of Asian economic growth. Indeed, the Mekong region has the potential to be one of the world's fastest growing areas. Thailand as part of the more developed ASEAN, is placed an important gateway to GMS.

Why Study in Bangkok

The Thailand climate is controlled by tropical monsoons and the weather in Thailand is generally hot and humid across most of the country throughout most of the year. While Thailand’s seasons are generally divided into the hot season, cool season, and rainy season, in reality it’s relatively hot most of the year. The weather in central, northern, and northeastern Thailand (the landlocked provinces) is determined by three seasons, whereas the southern, coastal regions of Thailand feature only two, making the weather in Thailand quite easy to understand and plan a trip around.In Thailand’s inland provinces the seasons are clearly defined: Between November and May the weather is mostly dry and the cool season and hot season occur from November to February and March to May respectively. The other inland season, the rainy season, lasts from May to November and is dominated by the southwest monsoon, during which time rainfall in most of Thailand is at its heaviest.